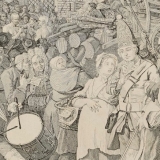 Measles in the Tudor Era

What was measles like for people before vaccination? Watch or read about measles in the Tudor era.

The Boke of Chyldren | Tudor Pediatrics|

Imagine a world where there are no books about keeping your baby healthy in your language, even in your country: that was the case in England until Thomas Phaer published “The Boke of Chyldren” in 1544.

With the talk of which culture has the exclusive rights to this or that, some have wondered if people of European descent should use infant carriers at all. To which I can only groan (and share this post).