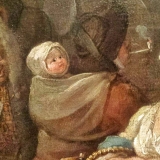 Let’s talk about the baby carriers in William Hogarth’s painting, “March of the Guards to Finchley” on display at the Foundling Museum in London. 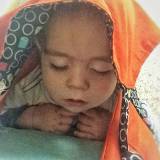 Wouldn’t it be great if there was some infallible trick to calm a crying baby? According to science, there just might be. (Get on your walking shoes.) 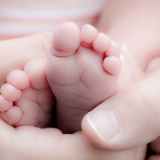 Human feet are unique in the ape family, made for walking instead of grasping. For our babies this means two fewer grasping limbs to help cling to their mother, which means that during the evolution of bipedalism, infants had a harder time hanging on. How did our ancestors survive?

From Baby Toting to Babywearing 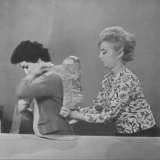 Dr. Sears claims credit for coining the phrase ‘Babywearing’ in the 1980’s but did you know interest in infant carrier cultures had been growing in popularity since the 1950’s? 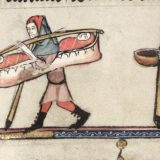 With the talk of which culture has the exclusive rights to this or that, some have wondered if people of European descent should use infant carriers at all. To which I can only groan (and share this post). 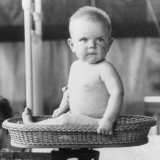 It’s not just that human babies are helpless at birth, it’s that they’re so huge, at least when we compare them to the size of other apes’ newborns. Fortunately we have all kinds of technology to help us carry them around. But how far back in history were our evolutionary ancestors dealing with these big babies?

They See Me Riding 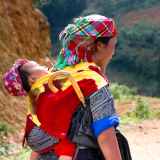 Why is it that some mammals can just leave their babies in a den or nest, while others carry theirs around (or have them cling on) through out the day?

The Beng Babies of the Côte d’Ivoire 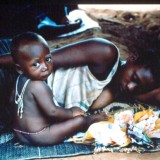 Learn more about Alma Gottlieb’s book “The Afterlife is Where We Come From” on the culture of infancy involving reincarnation and carrying among the Beng.